Encircle Publications is delighted to announce the winner of our 2017 Chapbook Contest.

Teresa Sutton has won with her manuscript, Breaking Newton’s Laws. 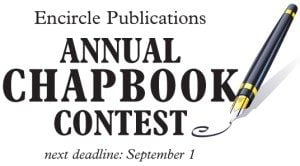 Congratulations, Teresa! The chapbook will be available for pre-order on our website at the end of November, and will be published in December.

About the author: Teresa Sutton lives in Poughkeepsie, New York, and has taught high school English for twenty-seven years, and she also taught at Marist College for ten years. Her first chapbook, They’re Gone, was published by Finishing Line Press (2012). Her second chapbook, Ossory Wolves, was published by Dancing Girl Press (2016); it was a finalist in the 2014 Bright Hill Press’ Poetry Chapbook Competition. The Poet’s Billow recognized her work as a finalist in the 2015 Pangaea Prize and a semi-finalist in the 2014 Atlantis Award. The Cultural Center of Cape Cod recognized her work as a finalist in their 2014 National Poetry Competition. Her poems appear in a number of literary journals including Fourteen Hills, Solstice, and Stone Canoe. She earned her BA in English from SUNY Albany, has an MA in literature from Western Connecticut State University, and an MS in education from SUNY New Paltz. She earned her MFA from Solstice Creative Writing Program at Pine Manor College.