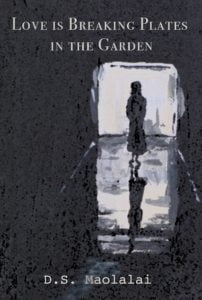 We are pleased to announce a new chapbook release: Love is Breaking Plates in the Garden by D.S. Maolalai.

“I’ve been publishing the work of D.S. Maolalai for a handful of years now. His story is an old one—love and loss—and an overwhelmingly familiar one by now. But every now and then a writer comes along with a voice that makes the familiar seem new and exciting again. Maolalai isn’t a conventional poet. Like all the thrashings of young hearts his free verse is a wild and jagged one, spewed across the page in fits, starts, and runs that often ramble downhill picking up and kicking off whatever detritus his leaky heartbrain has been availed of. Think beat lit. Think free jazz.”

Love is Breaking Plates in the Garden is now available for pre-order from the Encircle Publications Book Store. This is a chapbook you won’t want to miss!

Praise for Love is Breaking Plates in the Garden

D.S. Maolalai writes a travelogue of beds, bars, and the first regrets of love. The poems are done with such craft and immediacy that even the jaded are compelled to feel again the bewildering, blessed wind of youth’s finest mistakes—the promiscuous ego, the inevitable tinderbox of young love, the nights only remembered by scribbles on napkins. Yet after the tempest quiets, you feel in these poems the shaping of an essential tenderness and wisdom, the contours of which linger in the mind well after the book is closed.

D.S. Maolalai’s poetry rings loudly from the heart. He captures all the unravelling and painful moments of a relationship with a poetic skill that screams through a sea of emotions in powerful waves. A confident addition to our poetic landscape.

Sample poem from Love is Breaking Plates in the Garden

When she came to my cabin that night
I could tell by the smell of her
that she had been with him again—
she was drunk and swaying
and I pulled her close to me by the hips
and let her lean in for the kiss
before I pushed her away
along the side of the bunk
and she made a quiet sound
and her hand grasped the bedsheets as she fell,
so they fell with her
legs whipping in a tangle of pasty green fabric.
I went to my suitcase and brought out
a bottle and two glasses;
the drink spilled
with the pitch and toss of the ship
and somewhere I heard thunder:

She got up and came to me again
but I held her off with a hand,
just drank.
Somewhere on this ship there were
people that still loved one another
and still tolerated each other’s messes, bullshit,
snake thoughts, unhappiness and hysterical tiny fists
but I finished the glass and threw it at the wall
and stared at her eyes
with an ageing hatred like wine
and she said something about love
half mumbling with fishvoice
cowardice
but I could see her hands trembling
from the force of trying to stay
and perhaps from the blow of the wall against
her head
and I gave her the other whiskey
and turned to the bottle
and told her to get the hell out:

She left rambling the corridors with
that glass in her hand
and she still had it hours later
when she came back to me crying
and the storm had gotten worse
and I steadily more drunk
decided that I didn’t care what she had done
or why or with whom
and I picked her up and pulled
her to the bunk, jamming her panties sideways and
jerking at her dress and at my trousers
and the ship rolled with panic
a million mackerel and swordfish
tossed by ruin and I pressed my mouth onto her mouth:
She was always crying crying crying
and again, she said something about love
and kissed me
while the whiskey glass banged around loudly on the floor
and on deck men slid about
like greased billiards,
trying to keep the ship
from going down. 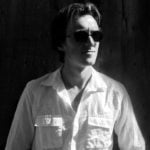 Originally from Dublin, D.S. Maolalai graduated from Trinity College with a Bachelor’s degree in English Literature before leaving to spend two years living in North London, typing poems on the nights he he didn’t spend on answering phones at a variety of security jobs. His work has appeared in a number of anthologies and magazines, including Killing the Angel, The Belleville Park Pages, Whistling Shade and the Unrorean, by whom he was nominated for The Pushcart Prize. He recently moved to Canada, and currently lives in downtown Toronto, where he spends his days walking around the city, reading in bars and scribbling notes on the backs of receipts. Love is Breaking Plates in the Garden is his first book.