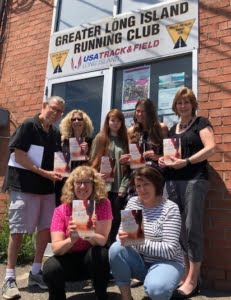 BASED ON A REAL LIFE BOSTON MARATHON LEGEND

Runner in Red raises funds to support a cure for lung cancer in memory of Barb Murphy, late wife of the author, Tom Murphy. See more at runnerinred.com

Here’s the story: there has been a long-standing belief that a woman slipped into the 1951 Boston Marathon undetected and ran the race. If that could be proven it would make her the first woman to have run a marathon on American soil. She wore “red,” as claimed by a group of Canadian runners who say they tried to bring the matter to the attention of race Director Jock Semple and other race officials. But to no avail, their story was never corroborated, and so today the “Runner in Red” remains a mystery and an urban legend.

A period piece set against the backdrop of the 2000 Boston Marathon, the Millennial marathon, this fictional mystery novel is also a love story, family drama and uplifting tale of the human spirit that explores the history of women’s running in page-turning fashion.

What reviewers are saying about Runner in Red

“Runner in Red moves faster than a speeding bullet through the streets of Boston, capturing the essence
of an old myth and the excitement of a new empowering story of women, passion, courage and heart.”
—Kathrine Switzer, first registered woman runner  of the Boston Marathon in 1967,
she ran it again 50 years later in 2017; founder, 261 Fearless, which empowers women through running (261fearless.org)

“Tom Murphy’s Runner in Red is an incredible story with so much local color and facts one could almost believe his book may be more fact than fiction.”
—Gloria G. Ratti, Vice President Boston Athletic Association

“Tom Murphy’s Runner In Red is an entertaining, fast-paced, mystery thriller weaving real-life characters and historically accurate events into a
scintillating tale about a search for the first woman to run the Boston Marathon – predating Roberta “Bobbie” Gibb’s iconic 1966 feat by fifteen years.
This novel is a must read for all fans of running.”
—Jack Fultz, winner of the 1976 Boston Marathon and trainer for the Dana Faber charity running programs.

There are no reviews yet.

Be the first to review “Runner in Red – GLIRC” Cancel reply